The Caverns are amazingly beautiful. Even for one like me who really doesn’t like closed spaces. It was a ton of fun and so wonderful to experience the 90% humidity after the dryness of the Guadalupe Mountains.

We had a few embarrassing moments in the caverns, though.

First, while going through The Big Room (which is quite big, for sure), there is one stalagmite that looks :::ahem::: like a boob. Of course, both Hubby and I giggle a bit and attempt to keep walking. Yes, we likely pointed as we giggled. And then it happened. The lady (and her family, I’m guessing husband and daughter) who was just ahead of us turned to us and said something to the effect of, “What’s amazing is that after millions of years, its still firm. No sag at all!” I watched her (supposed) daughter melt in embarrassment and she attempted to usher nipple lady on. But oh, no, nipple lady continued talking about what this particular stalagmite looked like and how firm it still was. This went on for much longer than either Hubby or I was comfortable with. Actually, the very first comment out of her mouth left us uncomfortable. I’m so glad Little Man isn’t quite old enough to understand any of it.

A bit later, as Little Man reached his limit (nap time!) he began to yell ‘gobble, gobble, gobble!” We have no idea where this work came from, and I don’t think its actually in reference to what a turkey says. And he continued, and when he realized it echoed, he kept going. It felt like he continued with ‘gobble, gobble, gobble’ for 10 or 15 minutes. It was likely more like 5 minutes. Hubby spoke in my ear, “type 2 fun”. Not long after, he feel asleep. I had him wrapped on my back and it was the greatest thing ever to have hi fall asleep on my back. 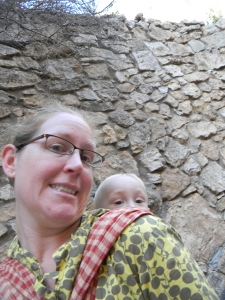 walking down into the caverns

Have you had any type 2 fun lately? And any embarrassing moments?

This site uses Akismet to reduce spam. Learn how your comment data is processed.